January 15, 2020, Montpelier, VT — Human rights organization Migrant Justice and the Vermont Department of Motor Vehicles have reached a settlement in a federal anti-discrimination lawsuit. The Vermont-based farmworker group, accompanied by its legal team, announced the settlement Wednesday in a press conference in the state’s capital.

“With this settlement, the state of Vermont makes good on its promise to guarantee access to driver’s licenses without discrimination,” said Migrant Justice leader and suit plaintiff Enrique Balcazar. “Though justice delayed is justice denied for the many whose lives have been ruined by the DMV’s harmful collaboration with ICE, we firmly believe that this settlement will put an end to that abuse of power going forward. Vermont’s immigrant community can now safely exercise this hard-fought right.” 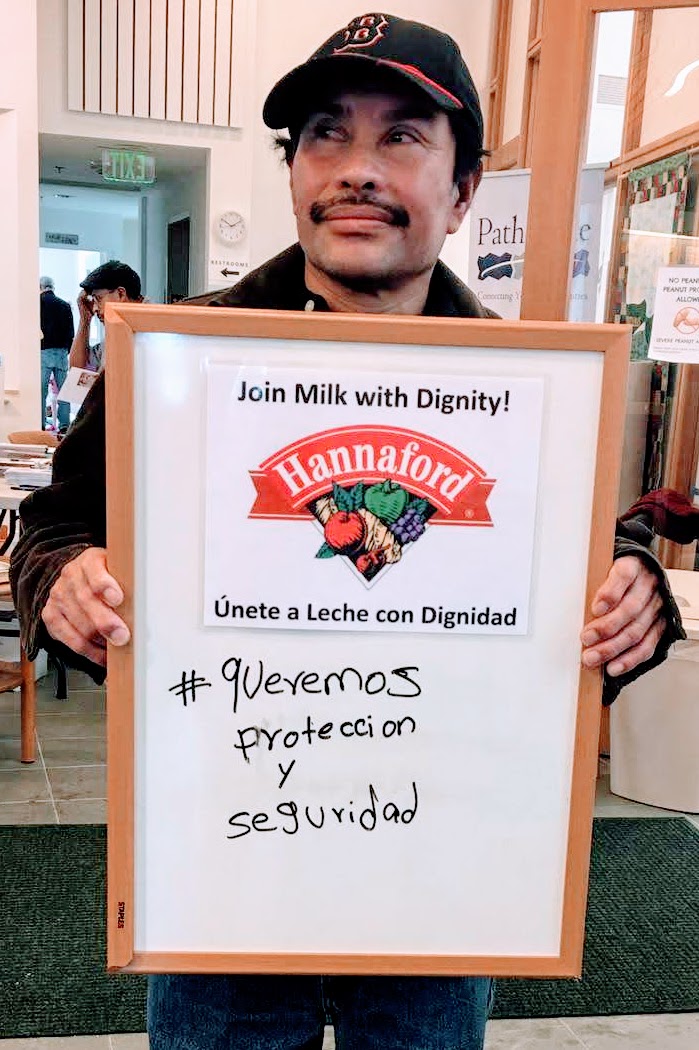 As the holidays approach, dairy workers are asking Hannaford Supermarkets to take responsibility and ensure fair and safe conditions for farmworkers. And we need you to demand the same: Hannaford brand milk must be free from human rights abuses!

Farmworkers like Don Gero are demanding safety and protection. And Hannaford can provide it by joining the Milk with Dignity program!

Hannaford continues to shirk their responsibility, and we are gearing up for a long campaign. Soon we will be announcing some big actions in the spring, but in the meantime, farmworkers need you to take action on your own!

Together we can keep the pressure on Hannaford to join Milk with Dignity!

This past weekend’s coordinated actions at Hannaford supermarkets sent a clear message to the company: consumers demand Milk with Dignity!

At 22 stores across New England, hundreds of farmworkers and allies rallied in front of Hannafords and delivered letters to store managers. From Machias, ME to Middleborough, MA, in large cities and small towns, Milk with Dignity supporters made their voices heard — and Hannaford listened.

Now is the time to send your own message that Hannaford needs to do the right thing: take a minute to send an email to the company CEO! Migrant Justice is calling for a Milk with Dignity Day of Action at Hannaford supermarkets across the northeast for Saturday, November 2nd! Farmworkers and allies will descend on Hannafords to tell the supermarket giant that it’s time to take responsibility for the human rights of farmworkers. Over twenty actions are already planned for 11/2! Sign up to join an action or organize one at a Hannaford near you!

National religious groups are endorsing Milk with Dignity -- and turning up the heat on Hannaford supermarkets to join the human rights program!

Following the recent farmworker-led march on Hannaford, three faith organizations wrote to the supermarket chain’s CEO urging him to sign on to Milk with Dignity.  The Presbyterian Church USA (with 2 million members), T’Ruah (an organization of 2,000 rabbis and cantors), and the National Council of Churches (the country’s largest ecumenical body, comprising 45 million churchgoers in 100,000 congregations) are all throwing down for Milk with Dignity.

Add your name!  Take a moment to send an email to Hannaford’s CEO telling him it’s time to join Milk with Dignity. On October 3rd, over 150 farmworkers, farmers, and consumers joined together to call on Hannaford supermarkets to join the Milk with Dignity program.  Marking the second year anniversary of Ben & Jerry’s entrance into the human rights program, the event celebrated the progress made under Milk with Dignity and called on Hannaford to aid in the program’s expansion.

Rosi, a dairy worker from central Vermont, invited Hannaford to join the program: “Hannaford has the power to transform the dairy industry.  With almost 200 stores around the northeast, they buy a lot of milk from farms where we are working hard milking cows. Hannaford has an opportunity to be a human rights champion by joining Milk with Dignity."

On October 3rd, 2017 farmworkers in Vermont made history by signing the first ever Milk with Dignity agreement with global ice cream maker Ben & Jerry’s. The company committed to source its milk from farms that comply with a comprehensive, worker-authored code of conduct. Ben & Jerry’s pays a premium to participating farms, Migrant Justice educates workers on their rights in the program, and a third-party auditor ensures farms’ compliance.

Today we are proud to release a powerful new video, featuring interviews with dairy workers across the state on farms covered by the Milk with Dignity program.  In the video the workers narrate the stark changes experienced in their living and working conditions, as well as the dignity they feel knowing that their rights are being protected by a program that they themselves have created.

And on October 3rd, we will be celebrating the two year anniversary of the program -- and taking action to expand the program. Join farmworkers from around the state to launch the next Milk with Dignity campaign! 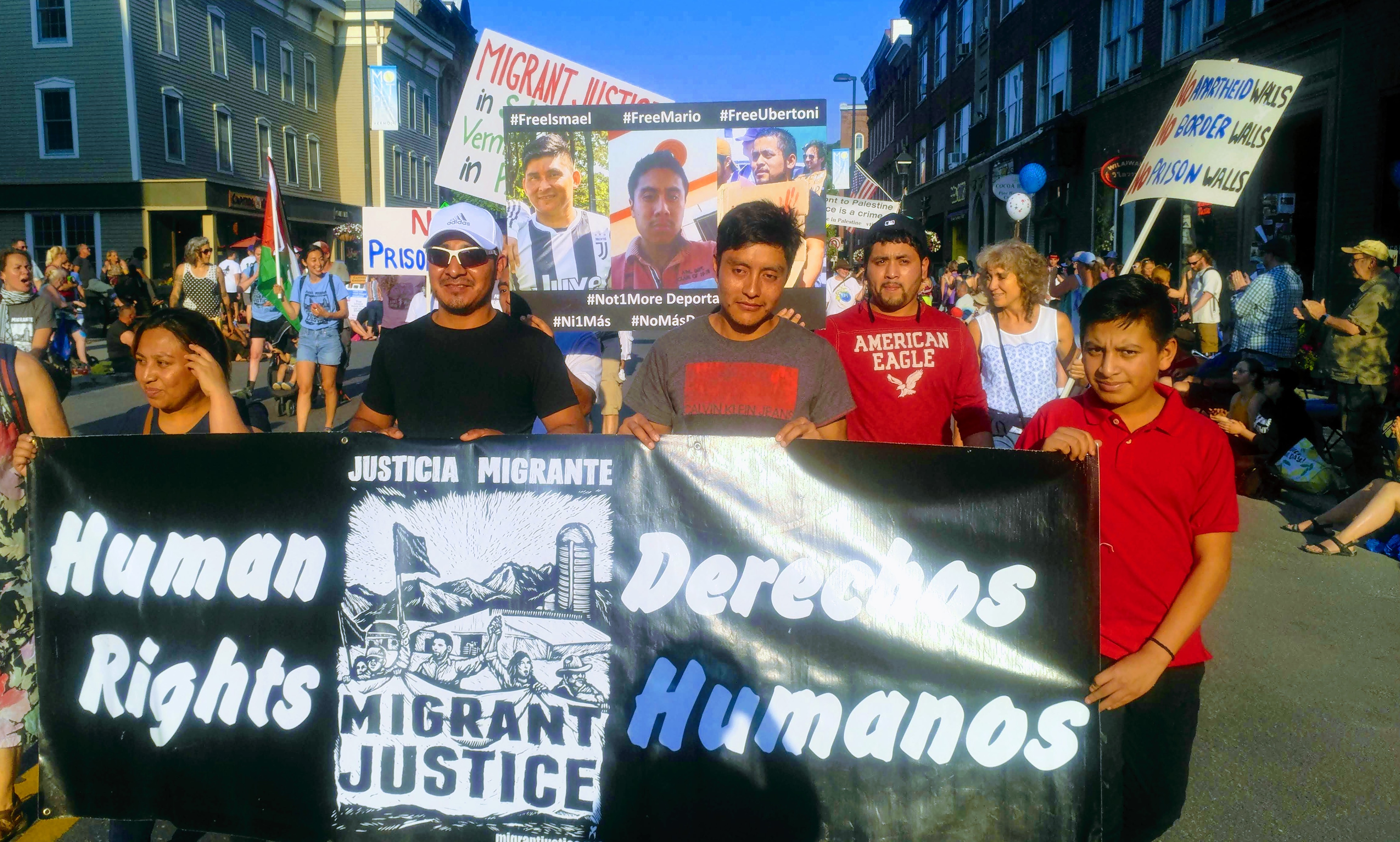 On June 23rd, three farmworkers were profiled and arrested outside a Vermont Walmart. Nearly two months later, after an arduous legal battle, Ismael Mendez is free and back in Vermont with his family and community. Sadly, Ubertoni and Mario were pressured to sign "voluntary departure" petitions and have been deported to Mexico. Ismael's liberation shows the beautiful promise of community solidarity and protest, while Ubertoni and Mario's deportation shows the cruel reality that all too many immigrants face.

After the detention of the farmworkers, nearly 2,000 supporters wrote letters to ICE denouncing the arrest and demanding their release. Dozens of fellow farmworkers participated in a photo-petition, showing their solidarity with their fellow members. And in vigils and marches around the state, thousands of Vermonters took to the streets to connect the brutalities of the national immigration system with the abuses happening in our backyard, chanting: "Close the Camps; Free the Farmworkers!"

On his release after six weeks in detention, Ismael said:

"I​ feel so happy to be free, and for the all the letters, the protests, and the marches. Thank you so much for being out there, fighting for me. From the day I was detained, I knew that people were supporting me, and it made all the difference. On Thursday May 30th, Vermont Governor Phil Scott signed H.518 -- the “No Polimigra” bill -- into law.  Migrant Justice drafted and fought for this legislation. Its passage gives local communities more power to strengthen policies that stop the collaboration between police and federal immigration authorities (known in Spanish as “polimigra”).

With this new law in place, it’s time to organize! Join Migrant Justice on Monday June 10th, 6-8pm to learn about how to organize against the Polimigra in your community.  RSVP to participate by videoconference or in person at our Burlington office.

Get your Migrant Justice T-Shirt!